Depression and anxiety. Read nearly any article on either subject written in the last decade and you will very quickly notice that the authors usually lump those two terms together.

Throw that question at the majority of mental health professionals who habitually, even daily toss those terms out, and you will learn little. The bulk of them will have to admit they use those terms together simply because everyone else does.

On the surface, the highly agitated state that is anxiety and the dull-grey lethargy that is depression seem to have nearly nothing to do with each other. Yes, they are both mood disorders and, yes, both of them are considered the common-colds of mental illness which will afflict nearly all 7 billion of us at one time or another – but, beyond that, there seems to be little or no connection.

It’s a question that puzzled me through the majority of grad school – one I threw at a number of professors and lab instructors, to no avail. For a while, I came to believe that they really had nothing to do with each other – that this was just some long adopted shorthand that everyone unthinkingly used.

But, it took me getting all the way to my internship in Winnipeg under a medical doctor turned therapist before I finally got a decent answer to that question. An answer that turned most of what I had been taught about mood disorders upside down.

It was then that I learned one key fact: Ultimately, almost all reactive mood disorders are rooted in fear. 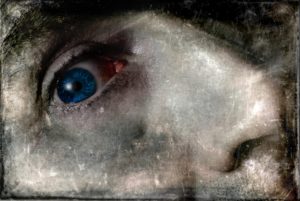 Oh, let’s be very clear here. There are many mood disorders (e.g., Bipolar disorders, Postpartum Depression etc) that are not reactive in origin. They are, most definitely, created, almost exclusively, through neuro-chemical imbalances. Those who suffer with them may have been some of the most emotionally and mentally put-together individuals on the planet before their brains, simply, became ill.

While popular media may attempt to describe all or almost all mood disorders as the result of neuro-chemical or brain imbalances, there’s little scientific backing for that idea and, in truth, modern psychopharmacology has nearly no idea why antidepressants work at all. (Though, for some people, they most definitely do work, should be taken and are REALLY important.)

In truth, the vast majority of people who struggle with depression or even full blown suicidal ideation tend to follow what I usually describe to clients as a depressive spiral. And, while they may need medication to arrest it, it’s definitely a result of mental behaviours or reactive in origin.

Let’s first trace out that rather discouraging and uncomfortable spiral and see how it all fits together – and then, in the next post, we can then take a look at how you can regain control and embark on the critical task of getting out of it. 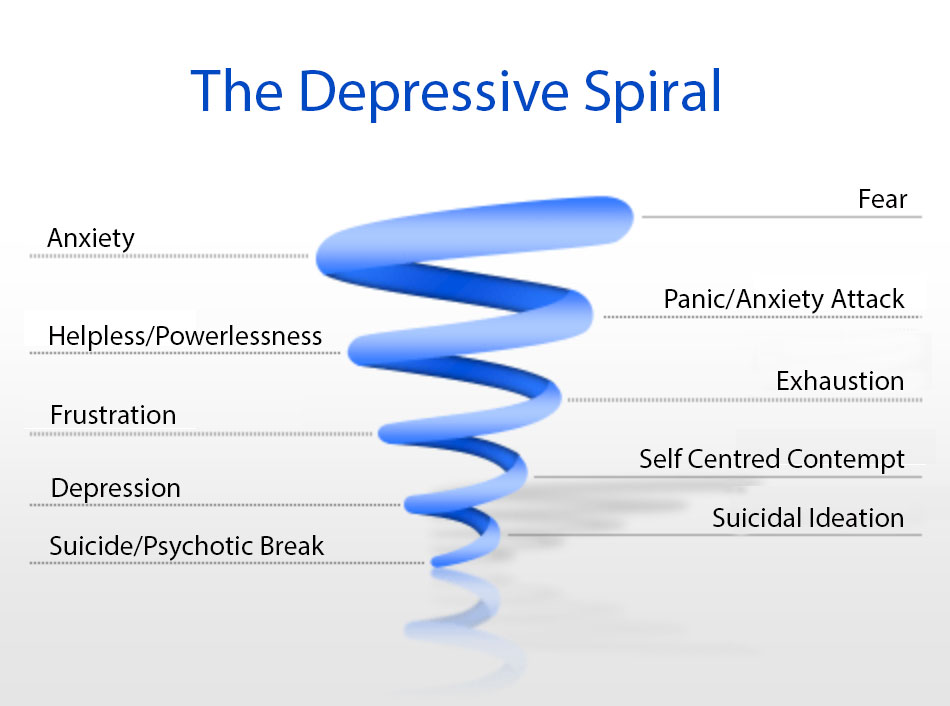 (1). Fear: Again, the starting point of the mood disorder spiral is fear. Reactive mood disorders are deeply rooted in fear and, while one may not stay there long, they find their genesis in a set of experiences (Usually relational or personal security related experiences) that the person does not feel capable of managing. They come with a deep sense that, however many units of personal resources I need to manage this situation, I have five less then I need. Therefore, I am in danger.

Fear, in most cases, is actually a very positive emotion – if it motivates a successful search for a solution to the problem. However, when that solution can not be found or when a person is simply unwilling or unable to attend to his or her emotional world, the natural instinct is to start to suppress that emotion of fear – to try and block it from the mind.

(2). Anxiety: The next step down this spiral is the experience of anxiety. Anxiety is not really an emotion – it’s a mood. Moods and mood disorders generally carry a huge component of emotional suppression. One after another, we take those unmanageable emotions and stuff them into the little pressure cooker we all have in our heart.

And, for a while, it works. Well, until that pressure cooker reaches capacity and we discover which part of the seal was the weakest as it starts to leak. The anxiety is often about something completely disconnected from the emotions we are stuffing into it (Say, for example, an obsessive fear of germs) but the force is shockingly high.

(3). Panic/Anxiety Attack: Initially, all we experience is the presence of that anxiety – which is, in and of itself, already crippling. But, then, it starts to build upon itself – becoming a self sustaining force in our lives. Essentially, we cease to just be anxious about some-thing or experience and, instead become anxious about being anxious itself.

Because, by this point, anxiety is pretty much a constant experience, our lives, increasingly, are no longer measured in terms of the presence or absence of the anxiety but, rather, how extreme the wave of anxiety we are surfing at that moment is. What follows is a host of disabling physiological and/or mental symptoms that most people describe as akin to, “Loosing their minds.”

(4). Helplessness/Powerlessness: As the symptoms of a mood disorder grow more and more incapacitating, hope begins to wane. Hope is a powerful force in any of our lives and, when it begins to disappear, paralysis begins to set in. 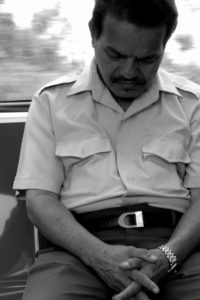 Negative thoughts, previously held at bay, begin to grow in force and intensity and our sense of self begins to take serious damage. Where before, we may see ourselves as capable of handing life and overcoming obstacles, now everything seems overwhelming and threatening.

(5). Exhaustion: All of the above is, both mentally and physically, incredibly demanding on us. The energy expenditure demanded by this level of frenetic mental activity is often even shocking for the therapist sitting on the side watching it happen. For the person in the middle of it, it’s like watching your life’s blood drain away.

Mentally, we experience a really strong sense that this can not continue and that determination is matched as the human body and mind begin to take steps to combat the unsustainable expenditure of energy that the anxiety phase of this spiral demands.

In the simplest terms, the body begins a self protective shutdown.

(6). Frustration: As the inevitable shutdown starts to occur, it becomes apparent that, no matter how hard you may will yourself to keep on fighting the good fight of anxiety, it’s no longer possible. Your mind and body simply will not cooperate.

There’s anger there, and it’s initially focused on the world around you. But then, even the anger starts to seem like it’s too difficult to sustain and the last fragments of that energy start being turned in on ourselves. 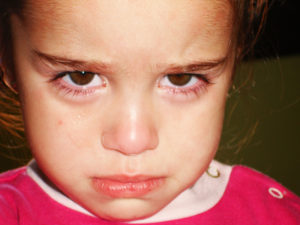 (7). Self centred contempt: By this point, we all feel like our lives are coming apart at the seams. We couldn’t manage the danger, our little pressure cooker has exploded, anxiety about being anxious has spiralled out of control to the point that the frenetic energy has burned us out and all we have left is impotent anger.

(8). Depression: Depression is nothing more then anger turned inwards. It’s a self protective mental and physiological flight from the incredibly high levels of autonomic nervous system arousal that is anxiety.

Really, it’s our body’s way of keeping us safe from ourselves. And, it works – at least initially.

However, even the grey fog that is depression has a cost. And, as it progresses, those cyclical thoughts of self hatred and the repetitive negative assessments of everyone and everything around you begin to pick up speed – just like the thoughts of anxiety previously did. And, more and more life energy starts to drain away.

(9). Suicidal ideation: Eventually, the human mind begins to seek for a way out. Initially, the thoughts of suicide are shocking and, just for a moment, the cyclical thoughts of self hatred are stunned into silence. In that shock, a sweet relief exists – but, only for a moment. So, the next time, the fantasy needs to be ever more vivid (and ever more draining on the autonomic nervous system) to have the same effect. 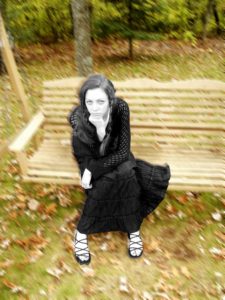 Thoughts of suicide are incredibly potent in that they carry a double punch of relief. The sheer horror of the thought both temporarily silences the cycles – and, in all of this powerlessness, they seem to offer the ultimate re-empowerment: “I have control again in that I, at least, can take my own life.”

But, that relief is short lived. So, the behaviour is repeated – and the thoughts grow ever darker to continue to offer the same relief or escape from the unresolved emotional baggage being carried. And, the distress only grows.

(10). Suicide/Psychotic break: But, in this state, life now becomes unbearable, exhausting and the human mind starts to crack under the strain.

Ultimately, one of two things happens:

If you still have enough energy remaining to even make the effort, many people make an attempt on their own lives. It’s almost never really an attempt to die – it’s an attempt to get control back and make the endlessly exhausting cycles finally cease. (This, but the way, is why people often attempt suicide right after antidepressants start working. It’s not that antidepressants cause suicide – it’s that they start to give the person enough energy back that they can finally expend the effort it takes to attempt suicide.)

If you don’t have enough energy remaining, then the human mind cracks. It gets called all sorts of things: Loosing it, having a nervous breakdown, experiencing a psychotic break, undergoing a psychotic episode and so many other things – most of which are insulting, to say the least. Thankfully, this usually (finally) lands the person in the medical and psychological care they really needed about 8 steps earlier in this spiral.

Ok, that was dark…

No, this is not a feel-good post and, yes, it is incredibly dark. However, when I walk clients through this in session, the most common response sounds something like this:

That is my entire life on one piece of paper. I’ve spent my entire life fighting that – without even knowing what I was fighting and how it fits together. It just makes so much sense now…

Knowledge – even knowledge of really dark things – is powerful. Yes, this is a road map for a trip into hell on earth – and, it’s also a potential road map for a one way ticket back out.

Anyone who tells you that they can cure a mood disorder in a few quick and easy cognitive behavioural therapy sessions is lying to you. Really fixing the problem takes fixing everything on that spiral above – but, when it’s fixed, it’s fixed and you can have a whole new life.

But, even before then, if the above chart looks like your life on a single page, then know two things:

(1). Defining the problem is over half of the battle of fixing it. The journey may not be easy, but, if it can be this clearly defined, then there’s a lot of hope for healing.

(2). You’ve suffered with this for more then long enough. It’s really time to reach out for healing.

Don’t wait for the next post – it’s time to get started on your journey of healing today!