For almost a decade, it appeared that (RSS) Really Simple Syndication was destined for the dustbin of internet history along with Gopher and TTL-based internet browsing. Competition between rival social media sites was growing, RSS feeds were less and less utilized, and on July 1/2013, Google killed off the flagship tool RSS was then beholden to: Google Reader.

In retrospect, it now appears Google took this action less because of the failure of RSS and more due to greed mixed with the insane idea that Google+ would somehow supplant FaceBook. Regardless of the cause, nature abhors a vacuum, and both social media-based and alternative algorithmic feeds rapidly rose to take its place for the next five years.

Then, the public started to wake up and realize how those algorithms had turned the internet into an outrage machine and steadily dumbed down the content and the quality of the information we were being fed. What has followed was an explosion of interest and the creation of a vast array of replacement RSS reader applications that all mostly exceed what Google ever dreamed of offering.

That demand is still growing, even for a site as small as ours.

Recently, we have been seeing increasing (failed) URL loads indicating a renewed interest in RSS. To meet this growing demand, we have opened RSS feeds on all of our sites and created a guide we hope will help those who have never used this incredibly reliable technology to take their first steps in it.

(Click the(RSS) beside the URL to automatically add our feeds to correctly configured RSS readers or cut and paste it manually below:)

For bandwidth purposes and to avoid site scraping, all of the above links are limited to the most recent articles.

Why use an RSS Feed Reader instead of Social Media?

Simply put, when you are getting something for free, you’re likely the product being sold. The internet started with the aspirational goal of making the information of the world available for free. Thirty seconds later, corporate entities started scheming out how to create walled gardens that put them back in control. The result is social media as we know it today.

Social media is nothing more than an attempt to generate all sorts of negative emotions that keep you on their site or app, make you miserable, and forever dangles the elusive promise that buying something will make you feel better. (Not the least of which is so-called FOMO – Fear Of Missing Out.) 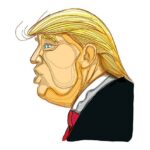 The media that they serve you results from complex algorithms that carefully evaluate your browsing history and serve you articles and advertisements that will keep you there and make you buy. Generally, the content you are served is dumbed down, polarizing, outrage-inducing, and a vast monothematic echo chamber.

In short, it’s a far cry from how editors of old used to try to create informed readers via impartiality and presenting many aspects of a debate. And, it has caused a de-evolution of political discourse to such a degree that democracy is increasingly appearing to be under threat in the United States.

It’s time to take back control!

Taking control back from the algorithms that are systematically melting your brain while rendering you uninformed and miserable starts with picking an RSS reader app or site – many people prefer the option of both.

Web-based RSS readers are web-based applications that you open an account on, add your favourite feeds into, and then log in to read your news from any web browser.

RSS applications are designed for laptop and mobile devices and seek to use RSS feeds to replicate all of the benefits of a social media-based application without the algorithms.

Let’s look at a handful of the best options: 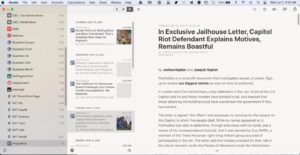 Reeder: Reeder is a Mac and iOS only application – and one of the most remarkable RSS readers ever created. It is designed to act both as a stand-alone product or a front-end to most of the major Web-based RSS readers (Including all of the below) as well as (seriously geeking out here) self-hosted options like FreshRSS and the now-defunct Fever RSS API I still self-host.

Reeder is my personal favourite, and I use it constantly.

FeedMe: FeedMe is free to use, though there are in-app purchases available. It is essentially Reeder’s Android twin and will connect to most of the same Web-based and self-hosted options.

While it is simple to install these applications on your mobile device, add some feeds, and then read, most people would also like the option to access the same feeds on their phone, tablet, and laptop.

Feedly: Feedly is the defining standard for Web-Based RSS reader applications. It offers both a paid and a free version and is commonly preferred by content professionals who use it as a research platform.

The Old Reader: The Old Reader is a highly social-minded app that focuses on sharing content. Married couples or content-related workgroups often prefer this application as it both facilitates sharing and offers a feed of what your partner or friends are discovering.

InoReader: InoReader is a power-user’s tool. It can follow 150 feeds for free and does not time-limit archival storage of information. It is generally preferred by academics and those who desire to create complex rules to sort and evaluate information.

NewsBlur: NewsBlur’s existence represents a rebellion against Google killing off their RSS reader software and offers what they term an “Intelligence Trainer,” which allows you to train the software to hide or show particular types of content.

All of the above offer a free version that should suffice for most people’s needs. Some also offer a paid version that enhances your reading experience.

Ok, I’ve picked an app; now, where do I find content?

One of the easiest ways of finding feeds is to go to FeedSpot. FeedSpot, of course, provides these links to get you to pay for their online reader, but you can easily copy the RSS URLs into your own choice of reader as above. (The actual URL is just to the left of the big orange RSS button.)

Or, here are almost fifty of the most popular and reliable:

The sites in bold above tend to produce some of the most accurate and objective coverage and are well regarded for upholding mostly forgotten standards of journalistic excellence and impartiality.

The above table is simply an export of my RSS feeds from Reeder. Most of the above services and applications are capable of importing an, “.opml” file. While everyone will have a unique set of interests, it is often easier to delete feeds than to manually add them.

Attached, as a zip file, is the above export in .opml format should you wish to import it as a starting point for your own journey.

Of course, access to credible, non-algorithmically shaped content is only half of the battle. The other half is discernment – the ability to differentiate fake news from real content. In a modern society, our ability to discern is essentially as good as our access to brilliant people who can defend their viewpoints against other equally intelligent people who may not see the world the same way.

Two of the best sites to watch those minds argue on the latest issues are:

Often the above still needs to be verified by searching through actual scientific publications – most of which were funded by your tax dollars but are still locked up behind paywalls. These helpful people maintain links to wherever URL Sci-Hub can be reached at today and here is a guide to using such.

Note: If you are having issues with this or another site’s RSS Feeds, 12Bytes has an excellent resource offering many other options to make almost any site work with your RSS client. Feel free to contact us for RSS feed help if we can assist in any way.