“So, just what is Spiritual Direction?” Calgary clients (quite unlike the majority of peoples around the world) have usually never even heard of it – and that’s the first question that comes out of their mouths…

They are generally even more surprised when to learn that, even in the eyes of many secular theorists, spiritual direction is considered essential to a complete process of PTSD treatment. Calgary, in some ways, is ahead of the rest of the world. But, in terms of grief counselling, Calgary seems to lag far behind.

Let’s look at how it fits into just one simple area: The work of a trauma psychologist. Calgary clients often come in with PTSD symptoms appearing as what Freud would have called a, “Death wish.” (Read more about PTSD Treatment Calgary/Christian Counselling here.)

It’s a concept referenced many times in Scripture.

Because ye have said, We have made a covenant with death, and with hell are we at agreement; when the overflowing scourge shall pass through, it shall not come unto us: for we have made lies our refuge, and under falsehood have we hid ourselves: 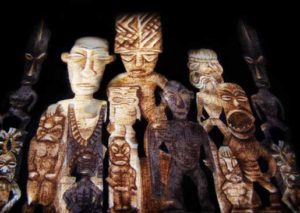 I often wonder what people think when they read things like that. Do they imagine a strange and foolish people signing deals with the devil in blood or just a terrifying horror movie of a suicidal death cult chanting and dancing around a fire?

In reality, the ancient Jewish people were much like we are today.

If you get beyond the weird language used by the ancient author, all he was writing about was a traumatized people who had found comfort in alcoholism. (That’s definitely not so different from today. If there’s one thing that is certain about the people we see for grief counselling, Calgary definitely knows how to drink away pain…)

But, then, the prophet is saying something much more profound. He’s saying that, as a result of the years of slaughter and trauma they experienced, they had undergone a shift in their sense of self. They no longer saw themselves as worthy of life or goodness anymore and were too afraid to trust themselves to even hope for such for fear that their dreams would be crushed again. (And, that’s also not at all different from modern peoples. When we hear the stories of clients coming to us for PTSD treatment, Calgary trauma victims also come in no longer even feeling like they are the same persons they were before…)

Most of the PTSD treatment Calgary clients require results from sexual trauma. In the midst of the the pain, humiliation and the heart crushing terror of a sexual assault, a victim will often experience such an overwhelming force of emotion that the only way to survive is to hide herself under a set of lies: She decides that the rape is her fault, that sexual assault is what she deserves and that love is no longer something that she can expect in life. Just like those ancient peoples, she is taking refuge in the lie that she is deserving of mistreatment to avoid facing how deeply she has been hurt.

Why? Because it’s easier to just go through the pain – instead of going through the pain and the even deeper questions about God’s faithfulness/existence, why this is happening and how this is so unfair. The person, now seeing herself as a victim deserving pain, then embarks upon what can almost literally be described as a conversation with Death that really is about emotionally (And sometimes even physically) beating herself up.

That false place of, “Safety in lies,” and the associated, “Conversation with Death,” (usually more clinically described as a trauma or PTSD response by those who would not describe themselves as a Christian psychologist) is marked by a lack of self care, an inability to trust themselves, a firm belief that she will never be able to find love and a deep struggle with even trusting herself to enjoy others. During grief counselling, Calgary clients will often talk about living under a set of internal rules which outright ban them from enjoying themselves – especially in relationship with others.

In the wake of trauma, we all have a tendency to turn our faces away from life, love and relationships and almost literally enter into that agreement/covenant and constant conversations with Death! 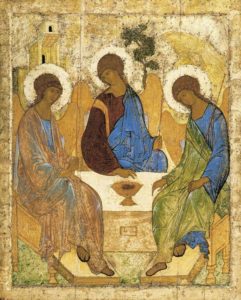 Even just understanding and accepting that those internal conversations are happening is hard enough – without ever facing the need to change them. Yet, changing those conversations is as essential as the task of restoring the person’s sense of self – both of which are core goals of spiritual direction. Calgary Christian Counselling clients have often told us that our sharing of Andrej Rublev’s iconic painting called, “The Hospitality of Abraham,” or simply, “The Trinity,” provided for them the greatest understanding of what that conversation with Death gets replaced with.

Instead, they then stood off to the side – instead of being at the table with their guests!

If you look closely (click to expand) at the image, there is a hole in it. Art historians tell us that, when they analyzed the residue remaining on the painting, they found evidence that Rublev had affixed a mirror in that space such that the viewer would see themselves in the image – in the fourth place at the table. He was saying that the true place for humanity is at that table – in intimate conversation with the living God.

It’s the opposite of a conversation with death…

Again, the vast majority of the PTSD treatment Calgary clients require is the result of sexual violence. Their fragile emotional state, the tendency to have lost themselves and become deeply immersed in that conversation with death make them ideal candidates for the gentle approach that is grief and trauma focused Spiritual Direction. Calgary support groups and other symptom reduction treatments can help, but real healing requires so much deeper of a reconnection with the self and replacing that conversation with Death, with a conversation with the living God.

So, if you’re tired of the conversation that’s dominated your mind since you got hurt, perhaps it’s time to connect with Christian Counselling Calgary or a Christian Psychologist Calgary and see what it means to change the heart of grief and trauma today.